Brio asked me to take care of the recipe for this week’s scary cooking, and the scariest thing for me was lungs – so when after a bit of searching I came across a recipe for Hungarian Liver Sausage with Rice I knew I had found a winner.  I called up our local butcher and placed the order to make roughly a half batch:

When we began preparing everything, I have to say I found the lungs anything but appetizing.  The bubble wrap-esque texture of the outside, the interior shot through with tough cartilaginous pipes, the foamy bubbles percolating out of the remains of a windpipe while cooking – it was clear we had graduated into proper scary cooking territory.  Kat was less squeamish than Brio and I – she hardly had her coat off before she was blowing up a lung like a baloon: 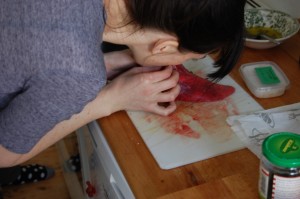 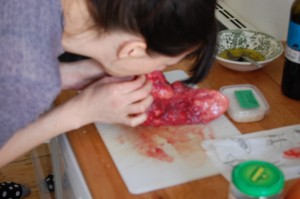 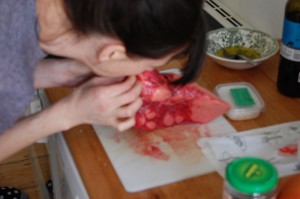 Not only did it swell to nearly three times its resting size, the color and texture changed dramatically.  This was a horrific and beautiful in equal measure – what an amazing thing a lung is!

We removed what bits of the windpipe we could from the lungs and then boiled them with the bacon for about 15 minutes before removing them to cool. 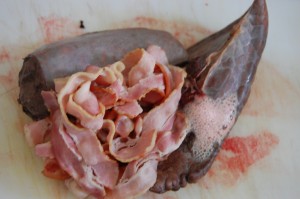 We had a difficult time determining how long these should be cooked for as the recipe was a bit light on details.  When we cut into the lung, it seemed still very raw so we cut into smaller chunks and put it back in stock pot for another five minutes. 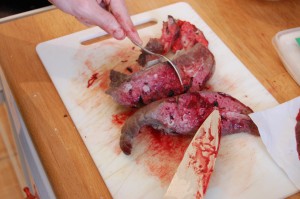 We didn’t have access to a meat grinder, so the next step was to finely chop the lungs, bacon and liver so that it would be of suitable size for stuffing into the intestines.  If you have a meat grinder this would be a much faster process, but for small amounts it’s still very possible to chop by hand. 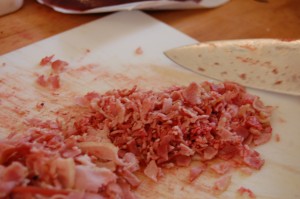 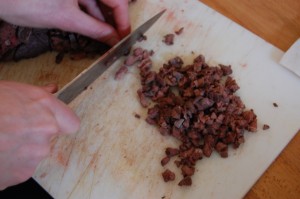 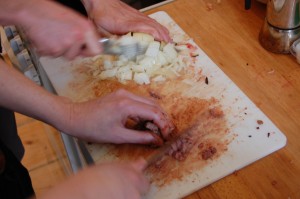 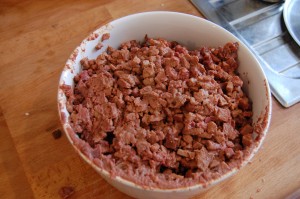 We boiled the liver for just a minute in an attempt to make it easier to chop.  I’m still not sure if this was a good idea or not as you can see that it resulted in something approaching paté.  During this time we also cooked the rice in the lung/bacon stock and fried a large, chopped onion in a tablespoon of lard.

Next everything got mixed together, plus a bit of added stock to make the texture a bit softer.  We decided to make two different varieties – one with fennel seed and red pepper flakes and the other with sage and majoram. 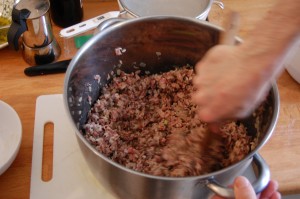 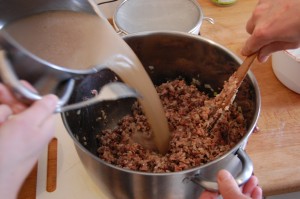 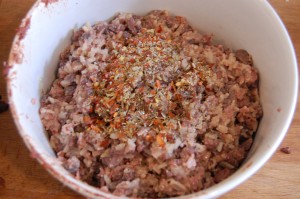 Finally it was time for the big event – we didn’t have a sausage stuffer either, so Brio fashioned a makeshift stuffer out of a water bottle and a camping mallet. Considering our humble setup it worked astonishingly well. 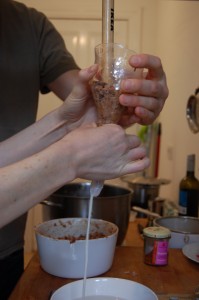 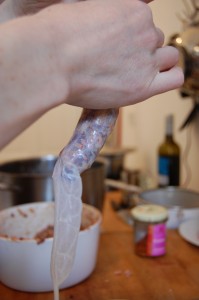 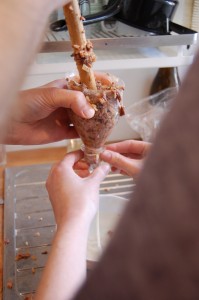 We all marveled over the finished sausages – they came out great!  One small problem was that we ran out of casings – if we made this or another sausage again, I think I would order ~1 meter/kg of sausage. 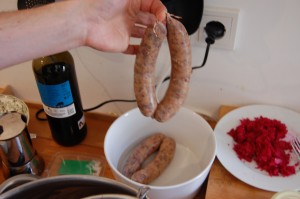 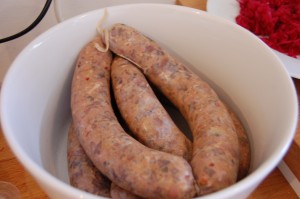 We pricked all the sausages a few times on each side before cooking and managed to only have one blow-out. 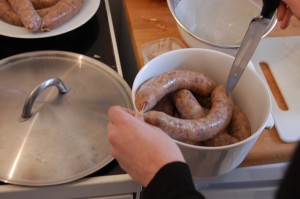 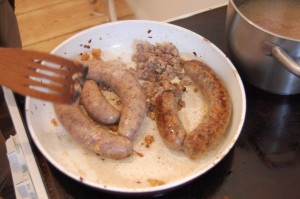 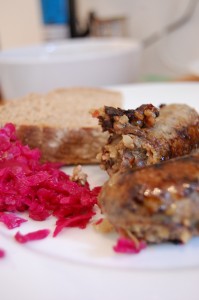 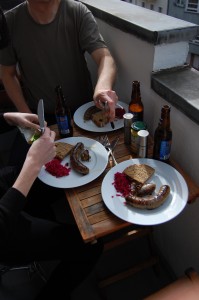 This was a fun day and the sausage came out great.  The fennel/chili sausage was the clear favorite, and all of us agreed we’d like to try our hand at sausage-making more in the future.  If you’d like to join in a scary cooking session, or you’d like help in starting your own, please contact me – dax at zerowastelabs.com

This site uses Akismet to reduce spam. Learn how your comment data is processed.