Yesterday I was at the Reve supermarket and happened upon pig’s tongue in the meat section (Pig’s tongue! At the Reve?!? What the…?). Most of Reve’s meat is pre-packaged, which is usually a signifier of evil-doing, but the novelty of them stocking such an item in a fridge otherwise committed to perfectly presented steak and sausages got the better of me. It was like someone’s ugly cousin showed up to the party uninvited. Out of solidarity for ugly cousins the world over, I bought a single tongue – about 200g for 2,55€. 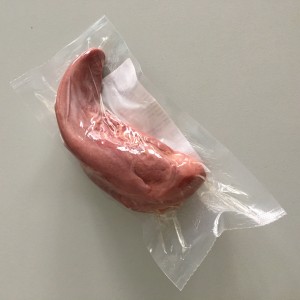 It turned out there was a reason I’d spied it near the bottom of the cured meats section: the tongue had been ‘corned’ – a process of curing meat usually associated with beef, which basically involves having the cut sit in brine and nitrate for about a week. Salted meat of one kind or another has been around for centuries, often used as a war ration – so I figured if poverty and depression had a flavour profile, this was going to be it. 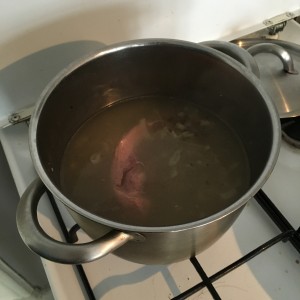 After a bit of research, the common directive was that one must simmer the tongue. This will help reduce the salt content and tenderise it. You can do this with stock if you like (just don’t add salt, because it’s already really salty from the curing process!) and it should be cooked for some time (some websites suggest more than 2 hours). The packaging said that the tongue had already been cooked so that may have sped this part up a bit for me. Tongue is quite firm to the touch (mmmm…), but after an hour and 15mins I gave it one last poke through with a knife without encountering any meaningful resistance. At this point you can take it out, let it cool a little, and remove any bits of skin or gristle (which seem to be more towards the back of the tongue). A lot of people on the internet are talented enough to peel their pig’s tongues, which seems like a pretty macabre party trick, but I just sliced a thin layer off the top. Weirdos. 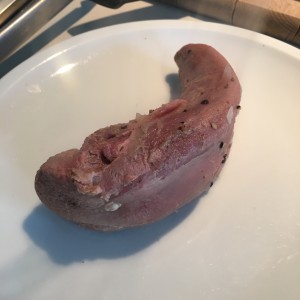 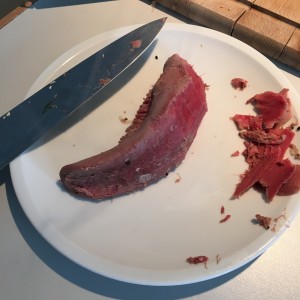 My plan was to then throw it in a pan and give it a quick sauté before serving. I sliced the tongue fairly thin (as you would with lamb) and lightly floured the lot. It went into the pan with some melted butter; I gave it a light fry and then a splash of red wine and worcestershire sauce to sauce it up a little. And also because I wanted an excuse to open a bottle of red wine in the afternoon. 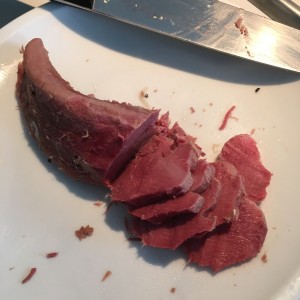 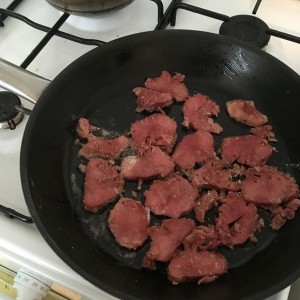 In the end I was in for a shock:

The tongue was incredibly delicious and ridiculously tender. Wonderfully, melt-in-your-mouth-ly tender. All-my-dreams-fulfilled / love-me tender. It’s probably the least ‘offal-ly’ tasting offal you could eat, and once it’s sliced there’s no way you’d recognise it’s unsavory past. It’s stealth offal. I served it up with some wirsing and baked parsnip chips (because that seemed like an appropriately old-timey thing to do with it) and tucked in. 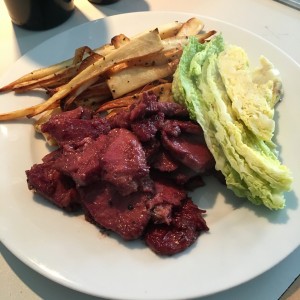 It was so easy I would definitely cook this again, next time sourcing from a grass-fed animal (of course). Seriously, it was DELICIOUS.